In late July the Upper North Fork Watershed was hit by a 500 yr storm event which dumped over an 1” of rain in 3 hours in the Minnesota Creek Drainage. The flash flood damaged many areas in town before depositing most of its mud and debris at the Paonia River Park, where Minnesota Creek joins the North Fork of the Gunnison.  A video of the flash flood can be seen below:

An alluvial fan composed of boulders, concrete chunks, and woody debris was deposited in the main channel of the North Fork. The concrete and debris presented a safety hazard to the public and significantly reduced fish habitat and river access. The flash flood also damaged the structural integrity of the Minnesota Creek Bridge enough to warrant closure of the bridge.  Unfortunately, the bridge provides the only access to the east end of the park and the recently completed trail loop. 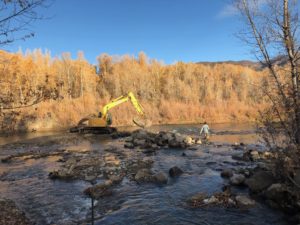 After the flood waters subsided, we were able to assess the needed repairs. Despite the many damages from the flash flood we were able to use funding through our “CPW Fishing is Fun” grant, to remove the debris from the main channel and utilize it to rebuild and reinforce the gravel point bar on the opposite bank. The stabilized point bar has improved fish habitat and provided River Park users with safe access to the North Fork.  We also took this opportunity to stabilize the Minnesota Creek Bridge and regain public access to the eastern side of the River Park. Many thanks to Jeff Crane of Crane Associates, LLC and Jeff Becker of Eco-contracting, LLC for performing the heavy lifting and river restoration!

Repairs to the washed out trail were completed On Nov 7 with the help of the River Park Working Group. The group organized a volunteer day to plant native vegetation on the newly restored point bar and re-surface sections of the trail that had been washed out.

This project was very successful and we are pleased to have the park re-opened for public use Thanks to everyone who came out to help with the repairs and get the park re-opened for the public. The River Park continues to be a unique gem of the North Fork Valley, and would not exist without the support of our community. To watch a video of the completed project and find out how you can support the River Park click here.