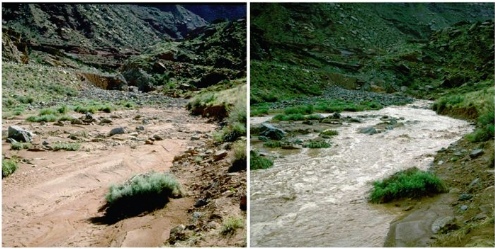 Throughout the Inter-mountain West, riparian corridors and wetlands – whether they contain perennial, intermittent, or ephemeral streams – act as natural sponges to collect runoff water and slowly release it during dry periods and extended drought. However, in an effort to streamline governmental oversight, the Trump administration is proposing changes to the Clean Water Act that would remove protections for several of these important water bodies types – “Ephemeral Streams”, which flow briefly in direct response to precipitation or groundwater, and “Isolated Wetlands, Ponds and Lakes”, which are bodies of water that are not adjacent or connected to major tributaries via surface water.

The changes proposed by the administration through the EPA and United States Corps of Engineers (USACE) would redefine what the federal government considers “Waters of the United States” (WOTUS). The proposed definition changes to WOTUS would limit the types of waterways that fall under federal protection to major waterways, their tributaries, adjacent wetlands and a few other categories.  The only wetlands that would be federally protected are those that are adjacent to a major body of water, or ones that are connected to a major waterway by surface water.  Ephemeral streams, which flow only briefly in direct response to precipitation, would not be protected, even though they constitute a major part of the country’s surface waterways, particularly in the west.

This would allow individuals and companies to dredge or fill in previously protected streams, wetlands, lakes and ponds, as well as other developments on private land. Examples of dredging or filling could be expansion of landfills, mining, removal of stream bank, ground leveling for housing, or oil and gas pad development.  The figure below indicates water bodies that would be protected under the new definition (in bold), and indicates those that would be “excluded” from protection (in light grey). 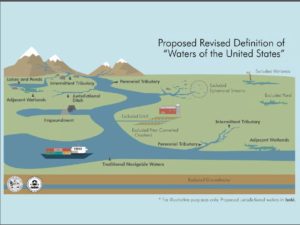 Isolated wetlands, ponds and lakes are unique ecosystems, and some of the most important features on our landscape when if it comes to providing clean water, drought resiliency, and flood protection. That is why these water bodies have been regulated for generations. For example, during storm events ephemeral streams channel water into drainage areas that help maintain an intricate groundwater system, recharging groundwater that serves freshwater springs, and channeling flow downstream, connecting to perennial waters. Ephemeral streams are vital for flood control because they provide additional floodplain capacity which slows the erosive stream velocities, and provides safe depositional areas away from homes and infrastructure.

Furthermore, the geographic isolation and local/ regional distribution place isolated wetlands, lakes and ponds in a unique position to provide habitats crucial for the survival of many endemic plant and animal species.  These areas are home for more species of birds than all other western vegetation combined; 80% of all vertebrate wildlife depend on riparian areas (which include ephemeral streams) for at least half of their life.

Clearly, the continued protection of ephemeral streams, isolated wetlands, ponds and lakes is an essential part of managing watersheds here in the western United States, ensuring that our lands can best respond during periods of drought, or intense weather. Protecting the quality of waters flowing into our waterways is vital for our agricultural producers as well as for the towns and communities that depend on springs and groundwater, for drinking.  Ephemeral streams, isolated wetlands, lakes and ponds have high functioning value for us all; let us not roll back protections; they must continue to be regulated to preserve their integrity now, and for the future.